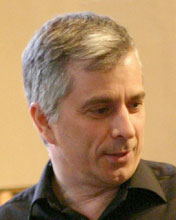 David Dunnett was educated at King Edward's School, Birmingham and Clare College, Cambridge where he assisted Tim Brown and studied the organ with John Pryer, John Bishop and David Sanger.

He continued studying with David Sanger as a postgraduate at the Royal Academy of Music and also spent a year as Organist of Marylebone Parish Church. He worked in the United States as Director of Chapel Music and Staff Accompanist at the College of Wooster, Ohio, before becoming Assistant Director of Music at Uppingham School. He became Sub-Organist at Winchester Cathedral in November 1991 and subsequently performed with Winchester Cathedral Choir in concerts, broadcasts, recordings and tours to Brazil, USA and Australia. He assisted David Hill with the Waynflete Singers, taught at Southampton University and is a previous conductor of the Southampton University Chamber Choir and Winchester Music Club.

He is a busy organ recitalist both here and abroad and also regularly accompanies singers and instrumentalists on the organ, harpsichord and piano. He features on numerous recordings as conductor, soloist and accompanist and has given recitals in Europe, USA and Russia.

He became Organist and Master of the Music at Norwich Cathedral in January 1996, and in 2007 returned to the organ loft as Cathedral Organist, where he now works alongside Master of Music Ashley Grote. He is the Choral Conductor of the Norwich Philharmonic Society, a previous part time lecturer at the UEA and a busy examiner.